His Holiness the Sakya Trichen, the 41st Head of Sakya Tradition of Tibetan Buddhism - Boston 2018 Program 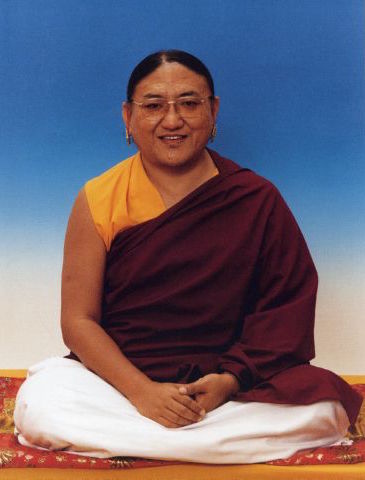 Prostration to the Guru

Prostration to the Buddha

Prostration to the Dharma

Prostration to the Sangha

Prostration to the Great Mother, the Perfection of Wisdom

Through relying upon the power and strength of prostrating to you, may the truth of our words be accomplished.

May they be destroyed. (CLAP)

May they be allayed. (CLAP)

May they be thoroughly allayed.

Through method, refuge, purification, and of the pure Mahayana, may the activities of Mara, which completely deceive sentient beings be repelled.

May it not exist! (CLAP)

May it become nothing! (CLAP)

By this virtue, having quickly attained the stage of the Jnanadakini, may all migrating beings altogether also be placed upon her stage.

Blessed Sitatapatra with assembly of deities,

by the mighty force of your compassionate aspiration,

according to my supplication,

spread wide the teachings of the Buddha,

please ward off the strong attachment and fears

of the patrons with their retinues, (CLAP)

ward off the evil plans of enemies and ghosts, (CLAP)

ward off the three hundred and sixty accidents, (CLAP)

ward off the four hundred four classes of illness, (CLAP)

ward off one thousand and eighty obstructers, (CLAP)

ward off the disturbances of demons above, (CLAP)

ward off the manifestation of ghosts below, (CLAP)

ward off the harm to those we respect, (CLAP)

ward off the manifestation of ancestral ghosts, (CLAP)

ward off diseases being loosed among humans, (CLAP)

ward off illnesses in cattle, (CLAP)

ward off the emergence of sky pollution, (CLAP)

ward off the disturbances of the poison arrows of the earth, (CLAP)

please ward off the manifestation of hindrances and calamities. (CLAP)

Arya Bhadra Charya: the King of Noble Prayers Aspiring to the Deeds of the Excellent

In celebration of the Buddha’s birth, enlightenment, and passing away, Lama Migmar leads the 16 Arhats Puja.

You may also purchase a package of five videos of Mangalam Yantra Yoga that you can watch at anytime as reference & guidance for your daily practice. These videos are available for those who have received Green Tara empowerment, transmission, and instruction from Khenpo Migmar Tseten.

Please send an email to mangalamstudio8@gmail.com if you are interested.

21 Tara has been launched as an act of devotion to Āryatārā, and to celebrate the completion of the new series of 21 Tārā thangkhas and the new translation of The 21 Praises to Tārā commissioned by Khenpo Migmar Tseten. Āryatārā (རྗེ་བཙུན་སྒྲོལ་མ་) is a female Buddha venerated by all Vajrayāna Buddhists worldwide. The preservation of these thangka arts is very important because there are many profound teachings, mindfulness meditation, and yoga practices associated with each of these thangkas.

This 21 Tara website is dedicated to Khenpo Lama Migmar’s late mother, Sonam Yudon, who passed away on Thanksgiving Day in 2010.

We share spiritual practice materials on our Vajrayogini site to support worldwide Vajrayogini practitioners in their daily practices.

Lama Migmar invites practitioners to perform Gana Puja of Tara and Vajrayogini on the Dakini day of the 10th and 25th day of lunar calendar. The Tsog offering materials are restricted – only practitioners who have received the empowerment should download the following materials:

Please click here for the dates of 10th and 25th day of lunar calendar.